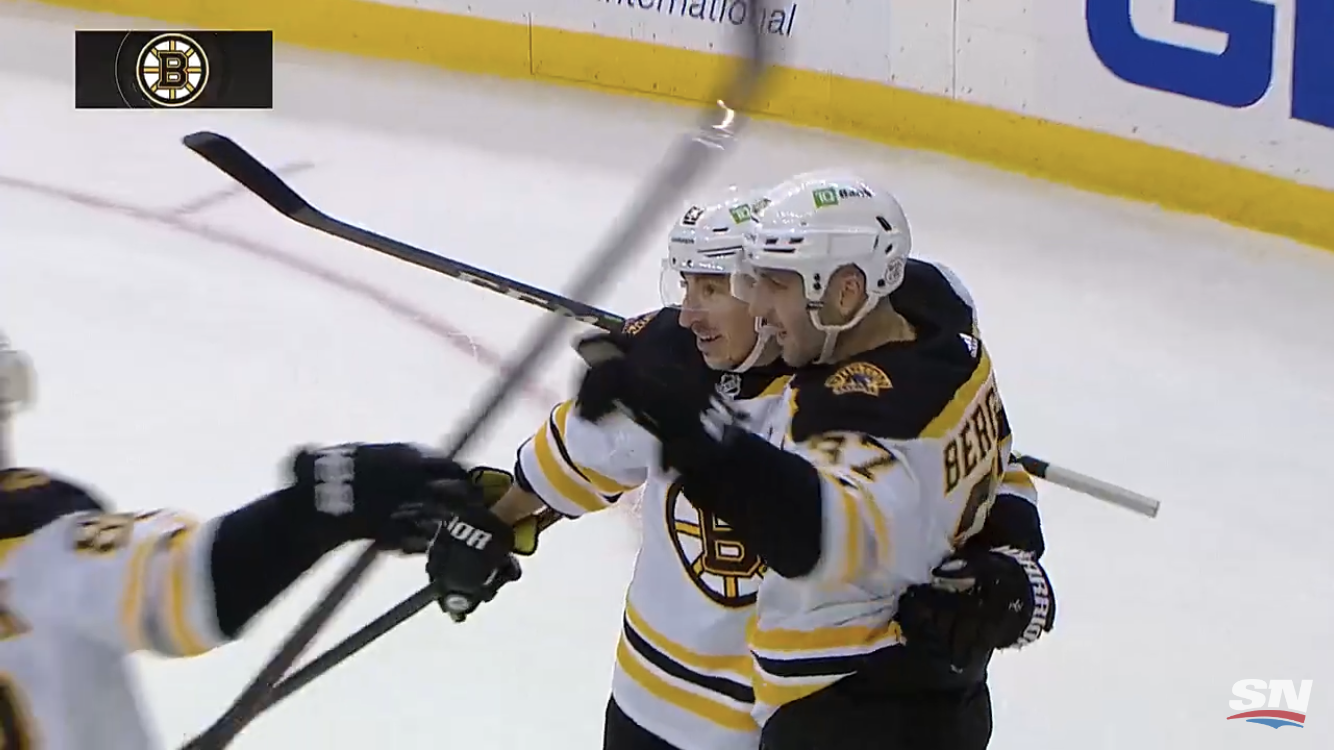 The Boston Bruins are headed to the Stanley Cup playoffs for a fifth straight season.

The Bruins punched their ticket to the dance with a convincing 3-0 win over the New Jersey Devils Monday night. The B’s outshot a disinterested and woeful Devils team 42-20 and while Devils goalie Scott Wedgewood did everything he could to steal another game from the Boston Bruins, the Bruins were just too determined to not let that happen and to clinch a playoff berth.

Patrice Bergeron had a goal and an assist; Nick Ritchie and Matt Grzelcyk lit the lamp and Brad Marchand had two helpers. Tuukka Rask got probably the easiest shutout of his career, stopping all 20 Devils shots.

GOLD STAR: Brad Marchand. In his 800th game in the NHL, Marchand once again showed just how far he has come as a player since entering the NHL in the 2009-10 season. At age 32, Marchand is having a Hart and Selke Trophy-worthy season. He was named the NHL East Divison Player Of The Month after leading the league in goals (14) and points (24) in 13 games in the month of April. With an assist on Bergeron’s 20th goal of the season at 17:54 of the second period and then on Grzelcyk’s tally at 17:17, Marchand already has an assist in each of his first two games in May and three total. He now has 36 assists and 27 goals in 49 games this season.

BLACK EYE: Devils effort. No one is discounting the mental effect this season has had on NHL players and combined with the fact that the New Jersey Devils will miss the Stanley Cup playoffs for a third straight season, it’s understandable if the Devils are struggling to muster up the motivation. That being said, they’ve been playing pretty scrappy and aggressive hockey lately so that’s why their effort Monday was so disappointing. To say the Devils were pathetic would be too kind. If not for Wedgewood, the score could’ve been at least 5-0 after the first period. The Bruins led in shot attempts (27-9), shots on goal (17-4), scoring chances (19-6), and high-danger scoring chances 5-0. The Bruins then racked up 20 shots on net to the Devils’ four in the second period, with two finally getting past Wedgewood. The Bruins finished with a shot edge of 42 to 20 and simply toyed with a disinterested Devils team.

TURNING POINT: Does the opening faceoff count as a turning point? This game was over then! All joking aside, we’ll have to go with Ritchie’s goal 9:08 of the second period. That goal sent a message that no Devils goalie was going to steal another game from the Bruins this season and while Wedgewood was still solid for the remainder of the game, the Bruins had their way in every aspect of the game after that.

HONORABLE MENTION: Patrice Bergeron. Just another day at the office for the captain in Newark on Monday. Bergeron doesn’t get the Gold Star or Honorable Mention nearly enough here but that’s simply because his extraordinary play every game is thankfully ordinary for the Boston Bruins and their fans. Bergeron scored his 20th goal of the season and has now hit the 20-goal plateau for eight straight seasons. He also picked up the secondary assist on Grzelcyk’s goal. In 15:22 TOI, Bergeron was 12-10 at the faceoff dot, had four shots on net, one hit, and was a plus 2. At 35, he looked younger than the teenagers and Devils players in their early 20’s did on Monday. He’s simply one of the best hockey players of his era and will be a major reason for whatever playoff success the Bruins have this year.

The Marchand-Bergeron-Pastrnak line cashes in again.

Extra Honorable mention to Boston Bruins defenseman Jakub Zboril and Wedgewood, who kept this game from being an absolute blowout on the scoreboard.

BY THE NUMBERS: 800. Congrats to Brad Marchand on playing in his 800th game.

QUOTE TO NOTE: “You play for an opportunity to play for the Cup. We’ve accomplished the first part of that. … We’re playing the right way.” – Boston Bruins head coach Bruce Cassidy on him and the team making the Stanley Cup playoffs for a fifth straight season.