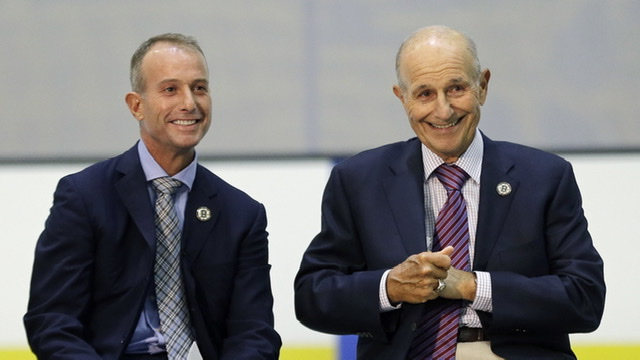 Don’t let their Saturday announcement of a $1.5 million Workers Fund Saturday fool you, the Jacobs family and more specifically Charlie Jacobs have returned to their miserly ways again and at the worst possible time. After taking ten days and becoming the final NHL team to create a compensation plan for suddenly unemployed part-time and game day employees Boston Bruins Owner and Governor Jeremy Jacobs has become a rightful target of his employees’ and Bruins fans’ ire once again. His son and Bruins Chief Operating Officer and Alternate Governor Charlie Jacobs should also have a big fat bullseye on his back as well.

Last September, Jeremy essentially handed all but the title of team owner over to Charlie and while Papa Jacobs still gets the final say, it’s Charles In Charge on Causeway now. The CEO made sure to put that infamous Jacobs stamp on things Saturday and failed miserably on a perfect chance to reassure everyone that the days of profiting off the expense of employees and putting the bottom line before team success were over. Until the final six regular season Bruins games are canceled, those employees won’t see one cent of that $1.5 million. According to the following statement released by the Bruins Saturday, they also won’t be compensated for the five games that were already postponed or the guaranteed two postseason home games the Bruins were slated to play in the 2020 Stanley Cup playoffs.

“The Jacobs Family has established a $1.5 million fund for the Boston Bruins and TD Garden part-time gameday associates who will be financially burdened if the six remaining regular season Bruins games are not played. We thank our associates for their patience and understanding while we worked through the complexity of this unprecedented situation.”

Following a CDC recommendation last Sunday that all events with 50 or more people be canceled or postponed for at least the next eight weeks, the NHL sent its players home and said they hoped to execute a plan to begin a training camp 45 days into that 60-day frame recommended by the CDC. That means, at minimum NHL games probably couldn’t resume until at least May 13. Also, there’s a solid chance the regular season games are never played and the league goes straight to the playoffs.

“This is bullshit!” a longtime TD Garden staff member told Boston Hockey Now early Saturday evening. “They’re so (expletive) cheap and sneaky and it will never change. They try to tell the fans ‘Look at us! We spend to the cap now!’ and it’s all bullshit! They find other ways to save and screw their employees and this is a perfect example.”

This staff member made sure to also point out the years of union strife with Delaware North and the union members of their part-time and game day staff.

“If you’re union, you get no breaks from them,” the employee said. “It’s the same old, same old from the kid [Charlie] and the father. What the hell are we supposed to do now huh? What the hell good will that money be when some of us, thankfully not me, but some of us can’t make rent and end up homeless?”

When asked in an email from BHN to confirm that these employees will not be paid unless those games are canceled, Bruins Vice President of Communications and Marketing Matt Chmura replied:

“The TD Garden is communicating to the relevant Union leadership, and individual associates will receive communication if Bruins games are officially canceled.”

Not surprisingly, neither Charlie or Jeremy was unavailable for comment and have made no public statements on the matter.

After even being called out by the Massachusetts Attorney Governor Maura Healey on Friday, this was Charlie’s chance to put the days when the Bruins wouldn’t even allow team employees who were union members park for free behind them. Or help fans forget the days when they would never spend for that final piece for the Bruins lineup that likely would’ve snapped a 39-year Stanley Cup drought a lot earlier than 2011. The Jacobs family could’ve really helped the workers who work their tails off for minimum to average wages despite the fact they know the Jacobs are some of the richest people in the world. Instead, Charlie just reignited the collective hate for his family by failing his employees when they needed him most.

Life can be a cycle as the Coronavirus is, unfortunately, showing us 102 years after the Spanish Flu ravaged the world. Unfortunately, it appears the Jacobs Family has also come full circle – but a lot faster – and returned to their notorious penny-pinching ways from before they spearheaded a salary cap into the NHL. There is still time for Charlie to save the day for these employees and do the right thing. Will he put his own stamp down and start a new legacy on Causeway St. or complete this return to the status quo?