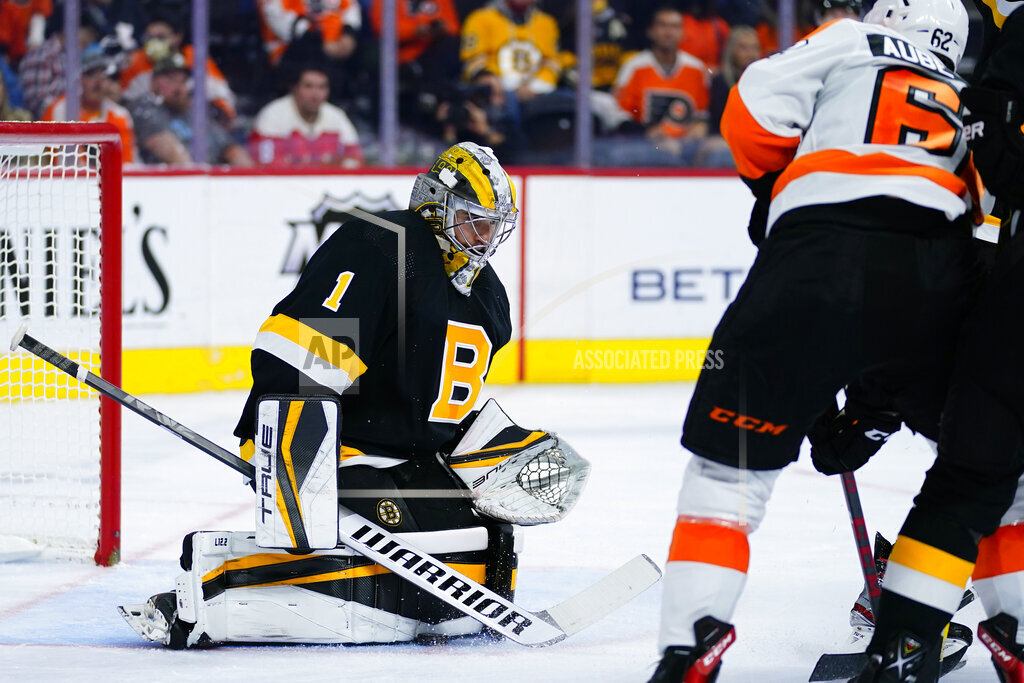 The Boston Bruins goaltending situation continues to turn as rookie netminder Jeremy Swayman has been recalled by the B’s and is with the team in Arizona.

Swayman was officially recalled on Saturday afternoon a day after Tuukka Rask wasn’t able to physically fulfill his duties as the backup goaltender in Friday night’s win over the Arizona Coyotes due to a lower body injury. Taxi squad goalie Troy Grosenick served as the backup on Friday to Linus Ullmark, who stopped 31-of-32 shots in a 2-1 win for the Bruins over the Coyotes at Gila River Arena.

The Bruins have listed Rask as day-to-day with the injury but clearly it’s going to be a few days as it looks like Swayman may get the start for the Bruins either on Sunday against the Dallas Stars, or on Tuesday night at home against the Seattle Kraken.

Bruce Cassidy said the team was leaning toward starting Ullmark on Sunday after he looked strong against the Coyotes on Friday.

“When we left for the road we didn’t think it was anything serious with Tuukka and it ended up being more than we anticipated,” said Boston Bruins head coach Bruce Cassidy. “If we have to put a goalie in the net then [Swayman] would be the guy. Right now, we’re planning on playing [Linus Ullmark] tomorrow [against the Stars] and we’ll talk to Swayman to see when he was last on the ice.

“Hopefully Tuukka isn’t out too long, but it’s obviously bringing in Swayman it’s more than a 48-hour thing.”

Swayman had been performing well since being sent down to Providence after the signing of Rask before a recent rough game dropped his AHL numbers.

The 23-year-old Swayman had an 8-6-2 record with a 2.26 goals against average and .918 save percentage in 16 games with Boston this season before seeing sent to the AHL in a roster numbers game based solely on service time where he doesn’t require waivers for a trip to the minors. The demotion of Swayman wasn’t a popular move with Boston Bruins fans, some of whom chanted “We Want Swayman” during Rask’s last losing start against the Anaheim Ducks last weekend in Boston.

Rask, on the other hand, has looked extremely rusty and not ready for prime time while posting an .844 save percentage and 4.28 goals against average in his four games since signing a one-year contract earlier this month. He’s been off his angles, dropping too quickly and for too long into the butterfly and been very susceptible to shooters aiming high on his net.

Interestingly enough, Boston Bruins head coach Bruce Cassidy didn’t rule out an AHL conditioning assignment for Rask if he misses enough time with the injury after spending more than 200 days between starts following summer hip surgery. The same kind of conditioning stint the Bruins had planned for Rask ahead of signing him before COVID wiped out a weekend of mid-January AHL games for the Providence Bruins.

“Originally that’s what all parties wanted, including Tuukka, to play down there,” said Cassidy of a stint in Providence. “Then the schedule changed, and he came to play here. Could that conversation happen again? Yeah, but Tuukka agree to that and be amenable to it. We can’t just assign him there. It could be a conversation depending on how he’s feeling. But there’s going to be some time off the ice where he’s going to have to catch up again. I’m sure that will one of the options discussed. Let’s get him back into practice and see how he looks and feels, but those are the things that need to be discussed as far as what’s best for the player and for the team.”

As was feared when it all began, it feels like the Boston Bruins fixed something that wasn’t broken with an Ullmark/Swayman tandem that was top-10 in save percentage and goals against average at the time of the Rask signing. It remains to be seen how patient they’re going to be with a banged-up Rask and how much urgency they’re feeling with a team that’s just two points behind the Toronto Maple Leafs for third place in the Atlantic Division.