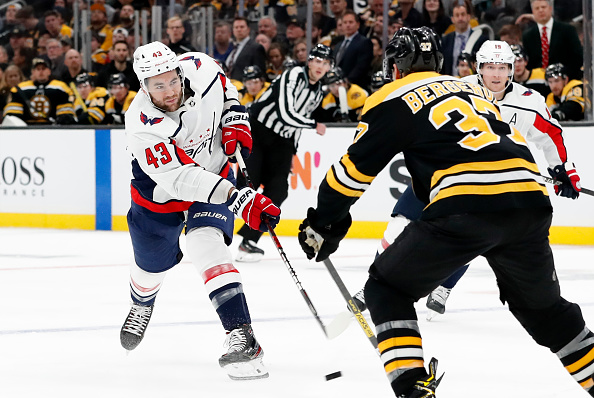 BOSTON — Here are the Talking Points from the Boston Bruins 8-1 loss to the Washington Capitals on Sunday night at TD Garden, where Zdeno Chara finally was able to get a nice send-off from Bruins fans.

GOLD STAR: Perhaps celebrating the Saturday night win for UMass, Connor Sheary decided to do some celebrating of his own at TD Garden on Sunday as a member of the Washington Capitals. Sheary scored a pair of goals among the eight-goal barrage for the Capitals and helped pace the offense for Washington. Sheary closed out the scoring in the first period with a rocket from the face-off circle that beat Daniel Vladar, and then opened the second period with a loose puck rebound after Jakub Vrana attracted all the Bruins defenders going to the net. Sheary finished with the two goals, five shot attempts and a takeaway in 15:21 of ice time. Truthfully, though, there were four or five Capitals players that could have taken top honors in this massacre.

BLACK EYE: Poor Daniel Vladar just left out there to take one for the team on Sunday night with eight goals allowed on 33 shots. It certainly wasn’t Vladar’s fault for the most part as Washington was getting clean looks at the net, second and third scoring chance opportunities and even scored on a Nic Dowd sniper shot that he fired through Steve Kampfer’s legs on the way to the net. But the bottom line was that Vladar was stuck with the eight goals allowed with shoddy defensive play in front of him and that dropped him to an .886 save percentage during his time in the NHL this season. That’s rough for a rookie goalie that’s played very well, so the Bruins have to hope they haven’t damaged the first year netminder’s spirit or confidence in any way.

TURNING POINT: For the Boston Bruins, it was over as soon as they discovered that Kevan Miller, Charlie McAvoy, Brandon Carlo and Matt Grzelcyk were all going to be out of the lineup. The Bruins were forced to ice an AHL defensemen core as a result of the injuries and predictably they played awfully in the defensive zone, or when under pressure by the merciless Washington group. The Bruins were down by three goals after the first 10 minutes of the game and down by six goals after two periods of play. It felt long gone for the Black and Gold by the midway point of the first period and that’s an embarrassing rarity for this group of Bruins players.

HONORABLE MENTION: The lone bright spot for the Bruins on Sunday night was Craig Smith scoring a third effort goal in the third period to just get the Black and Gold on the board. Smith has two goals and eight points in his last six games and produced on Sunday even after getting dropped from the top line where he’d played really well with Brad Marchand and Patrice Bergeron over the last few games. Smith finished with two shots on net, a hit and a takeaway in 12:24 of ice time and continues to show versatility, hustle and a professional effort level regardless of where he winds up playing in the B’s forward lineup. That’s good news for the Bruins as the addition of Taylor Hall to their forward ranks is going to slow everybody into the kind of spots intended for them at the start of the season, and that means Smith as a third line winger providing scoring depth.

BY THE NUMBERS: -3 – the plus/minus rating in Sunday night’s blowout loss for rookie defenseman Jack Ahcan, who has struggled in a pair of NHL appearances for the Boston Bruins this season.

QUOTE TO NOTE: “No excuses. Very, very poor showing.” –Bruins captain Patrice Bergeron was not mincing any words after losing to the Capitals by an 8-1 score.