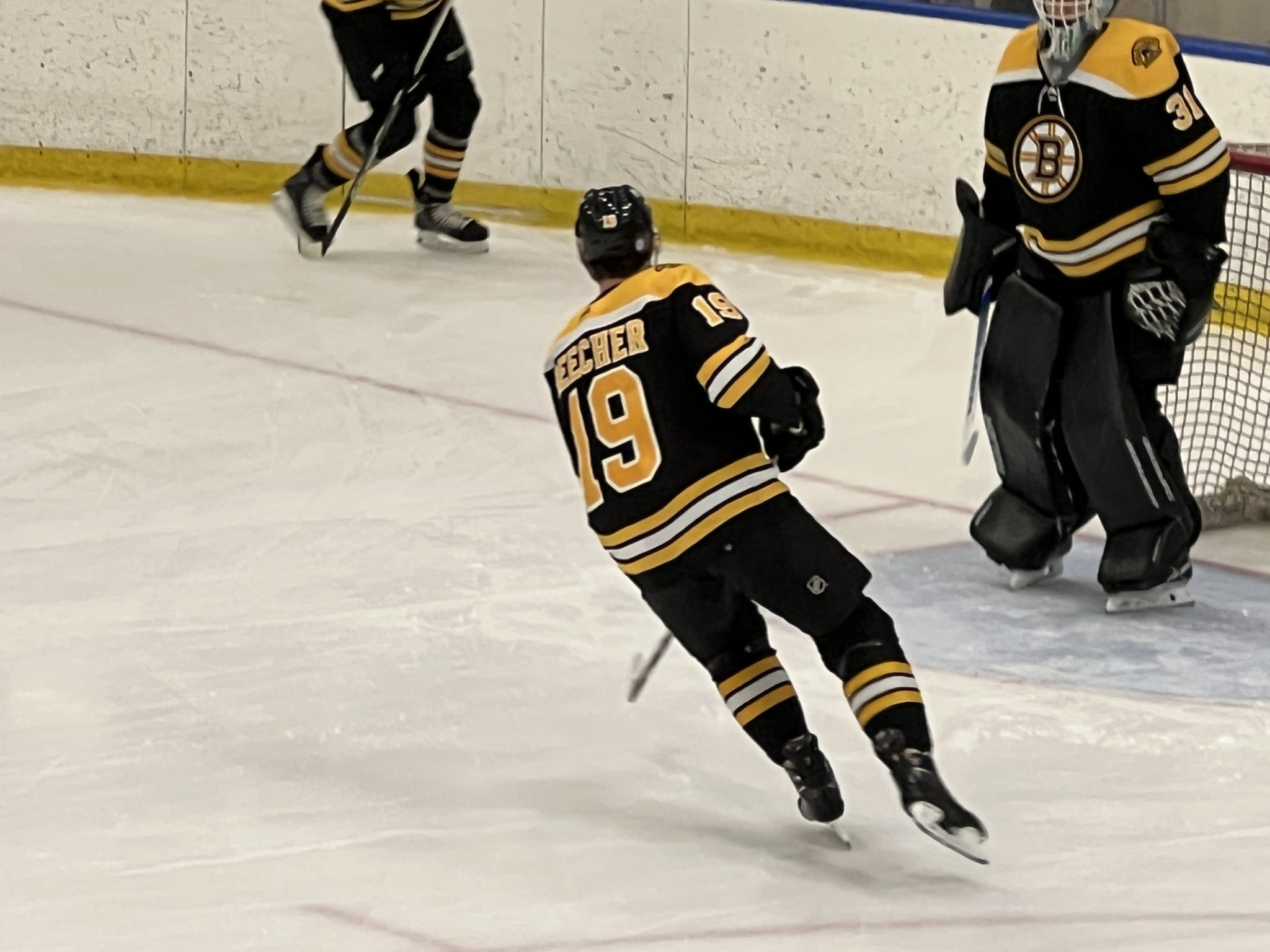 Boston Bruins prospect Johnny Beecher hasn’t been as highly heralded as most first round NCAA picks turning pro in recent years but organizational belief in the 21-year-old rookie center seems to be building.

Stuck in the middle of a University of Michigan lineup that many considered one of the best ever for the last three seasons, Beecher found himself playing in the bottom 6 more often than he would’ve liked. He decided to go pro last spring finishing his college career with 19 goals and 20 assists in 81 games for the Wolverines.

Whether it was the initial jolt of finally being free from an environment he and Boston Bruins scouts have felt had become detrimental to his development or the excitement of turning pro, John Beecher caught fire once he donned the spoked P of the Providence Bruins. Beecher closed the season out with three goals and two assists in first nine games in the American Hockey League. The 2019 first round pick (30th overall), is hot once again as he came into rookie camp and lit the lamp in all three Prospects Challenge games last weekend.

From the sounds of it, his hot stick and recent play has not gone unnoticed by those who will decide where he plays this season, Boston or Providence or both.

“The rhetoric has been a little bit unfair on Johnny, not to be defensive about it,” Boston Bruins general manager Don Sweeney told the media on Wednesday. “From a ceiling standpoint, we’ve been encouraged about what John’s physical attributes are. At times, he might have wanted more of an opportunity to be in a power-play position (at Michigan), but there was a pretty special group of guys who were prolific in those areas. Nothing against the coaching staff and whoever made those decisions. And maybe it’s on Johnny that he didn’t necessarily score at the rate that they would have compared him to other guys.

So, ideally, yeah we want to see what the ceiling is, and I think this is just the beginning of that. You saw a little glimpse of that in Providence and we started to work on areas that we want him to improve upon. And now we’re going to put him against a much higher level of skill in defending against him and see whether or not those things continue to translate like we saw at the prospect level.”

Beecher, who will play in the preseason opener for the Boston Bruins Saturday night against the Flyers in Philadelphia, was centering a line with Jake DeBrusk on his left and Nick Foligno on his right in the first on-ice sessions of training camp Thursday. Following the skate, Beecher discussed his journey to this point and how he’s dealing with the scrutiny so far.

“At the end of the day, everyone wants every opportunity, but I talked with coaches and teammates and captains and I just wanted to do whatever I could to help our team win,” the 6-foot-3, 210-pound pivot told reporters Thursday. “Obviously we had an unbelievable year. I figured if I could do my best on the penalty kill and 5-on-5 and give my teammates everything I could it would lead to success. At the end of the day, yeah, you want those opportunities, but it wasn’t the end of the world.”

The target on his back thanks to being a first round pick has been bigger than he’d like at times but he’s learning to deal with it.

“I think a lot of guys can get caught up, especially nowadays with social media and outside reviews,” said Beecher. “But at the end of the day, I just really don’t let anything get under my skin. I know what I’m capable of and the people that I’m closest with, they support me and they know what I can do as well. I just keep it to myself and not let outside distractions get to me. I’m only 21 years old and I’m definitely not at the peak of my career yet. I put a lot of hard work in the last six months and I’m excited to show everybody what I’ve got now.”