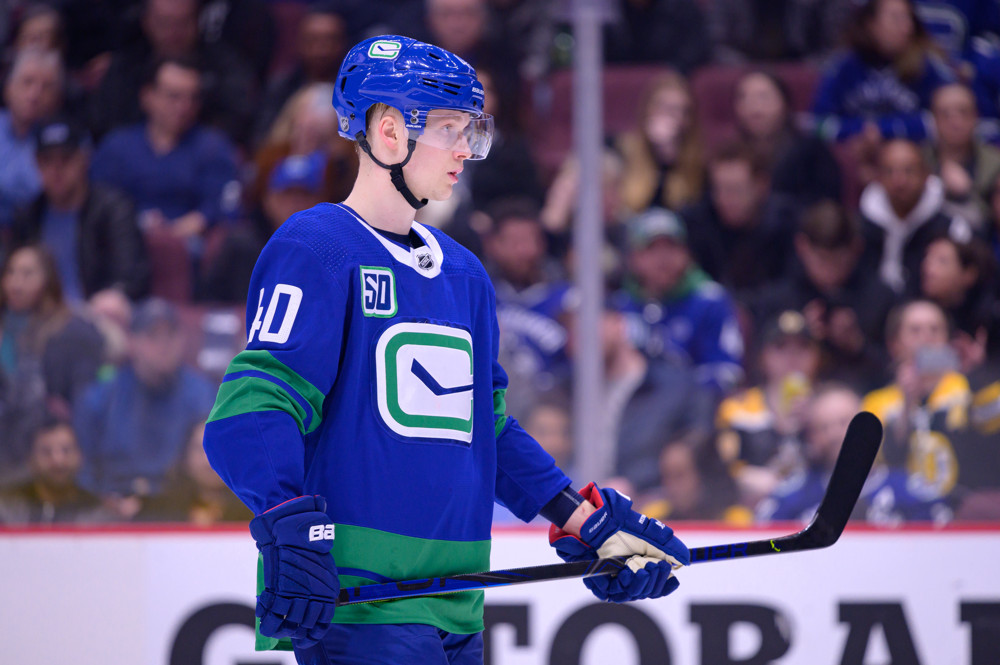 Two of the last three Calder Trophy winners, Minnesota Wild winger Kirill Kaprizov (2021) and Vancouver Canucks  center Elias Pettersson (2019) are both RFA’s and stuck in stalemates with their respective clubs. On Monday, Kaprizov, through his agent, threatened to bolt to the KHL should he and the Wild not find common ground by September 1st. Then on Wednesday, in an interview with Swedish reporter Uffe Bodin, Pettersson hinted that while he intends to sign a second contract with the Canucks, he’s not so sure about a third, should the Canucks not become perennial playoff contenders again.

Spoke to Elias Pettersson (in Swedish) today about his negotiations with the #Canucks (among other things). Here's a translation of what he had to say.
Original source: https://t.co/zy8WQloLax pic.twitter.com/88Y7oy8WWd

After coming up empty on the NHL trade market, Sweeney went on a signing spree on the opening day of free agency to help alleviate the void left behind by center David Krejci. Sweeney and Boston Bruins head coach Bruce Cassidy now plan to use newcomers Nick Foligno, Tomas Nosek, and Erik Haula, along with Charlie Coyle and Jack Studnicka in a bottom nine committee up the middle.

Sweeney entered unrestricted free agency with $28.4 million in salary cap space to spend. After signing Foligno, Nosek, Haula, defenseman Derek Forbort, and goalie Linus Ullmark on July 28, and then first round pick Fabian Lysell to an entry-level contract on Monday, the Boston Bruins have just $1.6 million left in cap space. They’re also hoping to potentially find a way to add Krejci and injured UFA goalie Tuukka Rask back into the lineup at some point during the 2021-22 regular season.

For some unknown reason, the NHL offer sheet is still considered taboo by NHL GMs. Since the salary cap was instituted into the NHL, there has been only one successful offer sheet. That came in the 2007 offseason when the Anaheim Ducks did not match the five-year, $21.5 million offer sheet to forward Dustin Penner from the Edmonton Oilers. The Oilers had to surrender their first, second, and third round picks in the 2008 NHL Entry Draft. Since then there have been six offer sheets matched with the most recent being the five-year, $42 million offer sheet the Montreal Canadiens submitted for Carolina Hurricanes forward Sebastian Aho.

Obviously, there’s no way the Boston Bruins could’ve known that Kaprisov and Pettersson would be in a staring contest with Wild GM Billy Guerin and Canucks GM Jim Benning respectively, but this would’ve been the summer to stash some cap space – if you have it – away for potential offer sheets. The flattened cap has plenty of teams hamstrung and every team has suffered financially from the pandemic. Even without knowing for certain that Krejci, 35, would leave, the Bruins have known that father time is catching up to him and 36-year-old captain Patrice Bergeron. Both players could conceivably be gone by the 2023-24 season.

So why not put aside some cap space to potentially offer sheet Pettersson this summer? After his brilliant rookie season in which he scored 28 goals to go with 38 assists in 71 games, Pettersson, 22, had another 66-point season with 27 goals and 39 assists in 68 games in the 2019-20 season. Even in an injury-riddled 2021 season, the star center had 21 points (10 goals, 11 assists) in 26 games. Now Pettersson is unsigned and skeptical at best about his long-term future with the Canucks.

If the Boston Bruins had thought long-term instead of a quick fix while hoping Krejci comes back and Bergeron’s body holds up, they could’ve gone the offer sheet route and potentially signed their No. 1 center for foreseeable future in Pettersson. Would the Canucks have matched a five-year, $41 million offer sheet to Pettersson? Probably, but if there was ever an offseason to try the offer sheet this was it and one could argue that the Boston Bruins threw that option out by choosing depth over skill.