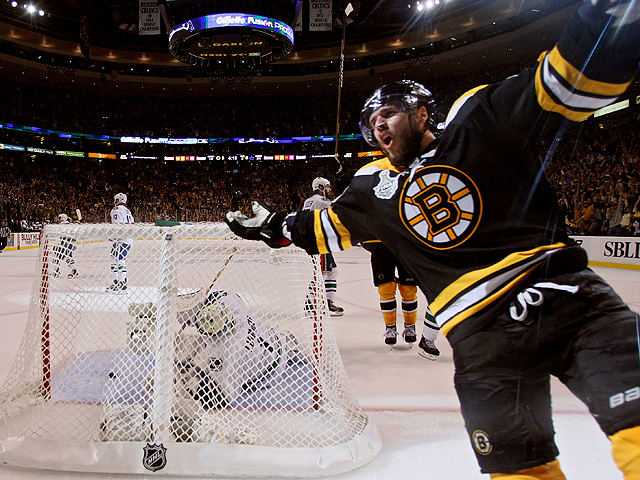 Ten years after winning their sixth and only Stanley Cup in the last 49 years, the Boston Bruins are still hoping the remaining core of the 2011 Stanley Cup team has one more Cup run in them.

On the same day that Boston Bruins General Manager Don Sweeney and team President Cam Neely dissected the Bruins’ 2021 season and looked ahead to the offseason, Bruins Nation celebrated the ten-year anniversary of the Bruins winning the 2011 Stanley Cup Final.

In addition to reflecting on the 2011 Stanley Cup run, Neely reflected on the worst NHL Draft in team history.

We’ve also got Stanley Cup Playoffs semifinal coverage for you from our teammates at NYI Hockey Now and Vegas Hockey Now, as well as national coverage.

That and more in the latest Boston Hockey Now Daily!

While the Bruins will use a projected $30 million in cap space to try and sign Krejci, Rask, Mike Reilly and Taylor Hall, they will also try to finally land that elusive top 4, left-shot defenseman on the NHL trade or free agency market. (BHN)

On a day when Bruins Nation was reflecting on the 2011 Stanley Cup win, Neely was asked to reflect on the botched 2015 NHL Entry Draft and how it’s still lingering over the Boston Bruins franchise. (BHN)

Bruins social media and plenty of Boston bruins content focused on that glorious night in Vancouver ten years ago tonight and Neely recalls just how much that Cup win meant to Bruins fans. (BHN)

So how did the Vancouver Canucks and Boston Bruins suddenly become bitter rivals in the 2011 Stanley Cup Final? (ESPN)

The Boston Bruins are celebrating that 2011 Stanley Cup win with a special four-part series on ‘Behind The B’. (Boston Bruins)

Ten years ago tonight, the city of Vancouver was almost burned to the ground! (Vancouver Province)

Finally, I was lucky enough to break the news on the eve of Game 7 at the 2011 Stanley Cup Final that it would be Mark Recchi’s final NHL game. After the game, I was the last to interview Recchi in his hall of fame career. (ESPN)

Will Islanders forward Oliver Wahlstrom draw in for veteran Travis Zajac in Game 2 of the semifinals against the Tampa Bay Lightning on Tuesday night? (NYI Hockey Now)

The Montreal Canadiens really missed defenseman Jeff Petry in Game 1 and there’s no telling when the puck-moving rearguard will return. (TSN)

So why did Gerard Gallant, a former Detroit Red Wings player, and teammate of current GM Steve Yzerman end up with the New York Rangers and not back in Motown as the Wings next head coach? (Detroit Hockey Now)

Could the Philadelphia Flyers be a team that former Boston Bruins defenseman Dougie Hamilton agrees to be traded to? (Philly Hockey Now)

Former Boston Bruins assistant, and a member of that Cup-winning coaching staff ten years ago, has been hired as an assistant coach for the Anaheim Ducks. (OC Register)

So how did Gallant become the new bench boss for the Rangers? (NY Post)

Here’s a list of potential suitors for Hamilton. Thankfully the Boston Bruins are not on it! (SI/Hockey News)

On Monday I reported in the latest ‘OTR’ that the Seattle Kraken plan to be active on the NHL Trade market and on Tuesday Sportsnet NHL Insider Elliotte Friedman confirmed that. Friedman also said Hamilton could be a player they target. Friedman did have one Bruins tidbit too. (Sportsnet)